Monday May 9, 2022
By: Phoenix Energy Technologies

ConnexFM united attendees at the 2022 conference in Long Beach, CA in late April with the theme: “You Belong Here”, amidst a strong recruitment push into food & beverage, healthcare, and retail, and an expansion of their Canadian resources.

ConnexFM is the leading multi-site, cross-industries facilities management conference, which is invaluable in connecting with customers and partners. It is also a great way to learn about the growth and initiatives ConnexFM is investing in, which this year includes: 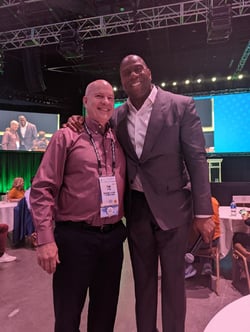 Sessions and keynotes were lively, including an early address by Earvin "Magic" Johnson about his business and philanthropic ventures. Customer Experience Manager, Tim Clark, was fortunate to catch a photo with Johnson during his session.

Our very own Ron Rau, legacy Connex President (2001-2004), had the distinguished honor to present the Lawrence W. Whelan Lifetime Achievement Award to his dear friend and mentee, Nicki Frank.

Frank gave a heartfelt acceptance, choking up in her thanks as she and "Larry" Whelan used to be competitors many years ago. She said she was very touched to be receiving his award (video of acceptance below). Phoenix Energy Technologies is proud to be represented by Michael McMahon as a member of the newly formed ConnexFM Food & Beverage Council. We sponsored a reception after the Tuesday Exhibition where food and beverage industry reps were able to mingle, network, and exchange ideas with one another.

We were delighted to prepare several educational sessions for the conference, with one highlighting our latest feature Carbon Manager™. This feature lets users quantify and track their carbon footprint across typically siloed data, which gives Facilities Managers the power to reliably list numbers in carbon reports increasingly required by boards, Nasdaq, and federal and local governments.

For more information on the sessions we presented, please check out our Facility Manager Datasheets on Alarm Manager™ and Carbon Manager™.

Building a Business Case for Futureproofing

One of the more stimulating ConnexFM 2022 panel sessions involved the newly formed Technology Council discussing how organizations can “futureproof” not only their facilities management department, but their whole organization.

The panel talked about how futureproofing differs from disaster response, as the latter represents the minimum preparations that organizations should make. Futureproofing is not just predicting emergency response, but reaches beyond to a more in-depth level of delivering value in the face of predicting changes such as in economy, leadership, or any change.

The moderator asked the audience what areas they should be focusing on in their respective industries to futureproof, with such answers including:

Finally, the panelists discussed the importance of utilizing technology for futureproofing. The Connex Technology Council's goal is to simplify the process of ever-changing technology for its members by collecting a library of resources to help them make the best technology decisions for their business needs.

Lastly, A Little Fun at ConnexFM

The closing reception ended with entertainment by Vanilla Ice to a very involved crowd.

The next ConnexFM conference will take place in Dallas, TX, in April 2023. We hope to see you there!

Learn more about Alarm Manager™ and Carbon Manager™ with our Facility Manager Datasheets.